10 Larong Pinoy Kids of Today Might Be Missing Out On Remember those days when we were eager to get our homework done to be able to go outside and play? Nowadays, do kids still do that? With cell phones, tablets, iPads, and computers, a quick Google search of popular games in the Philippines will reveal Mobile Legends: Bang Bang as number one. Of course, there are also the risks of acquiring the coronavirus by being in contact with other people, let alone going outside.

One of the things that the pandemic taught us is that socializing can be done online, like after-school hangouts through gaming, movie streaming, and more. With that in mind, would it be safe to say that these Pinoy street games are just a thing of the past? So before we totally forget about them (sure, we still do hope not), let us take a stroll one more time down memory lane and go through this list of Larong Pinoy! This game involves players jumping over the baka or “cow”– the it, who is supposed to crouch down. Once every player got their turn, the baka will have to go higher and higher until another player fails and becomes the new it. Also known as hide-and-seek in other countries, this popular children’s game requires at least two players to… well, hide and seek. The it must count to a predetermined number with their eyes closed while the other player or players go hide! This Filipino version of “Tag” also involves two or more players. The it must chase other players, tap them, and yell “taya” to mark them out of play. It requires a lot of stamina and running skills that tire me out just by writing this paragraph. Can’t imagine how much energy we used to have. Lol. 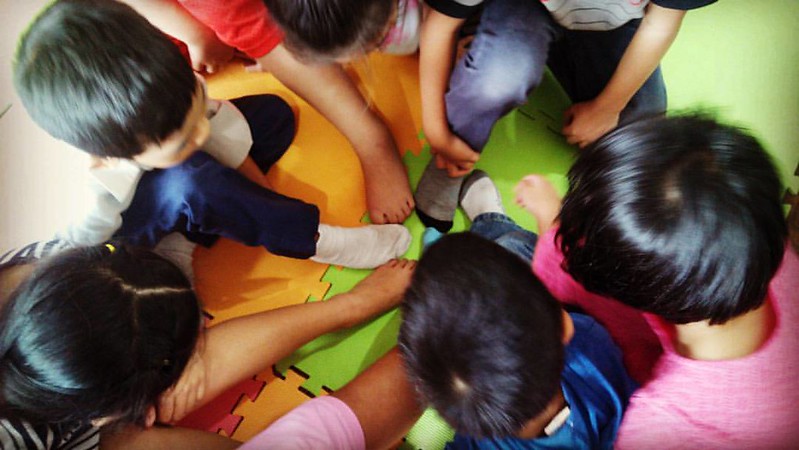 “If your shoe is dirty, please go home and change it!” I know you sang that part because you memorized it by heart! Who could forget that song when all you think about while your playmates are singing it is to not become it? Another energy-filled larong Pinoy, the it has to“freeze” other players by tapping them. However, runners can “unfreeze” the “frozen” players by tapping them and saying “Water!” Also called “knucklebones”, the game starts by scattering the “stones” or “jacks” onto a surface. You will then need to throw the ball into the air, pick up a single jack, and let the ball bounce before catching it again. Players win by clearing out the jacks but of course, fouls let other players take their turn, and the game levels up a notch after each round! Similar to Korea’s Squid Game, Patintero requires two teams with around two or more players each. One team will be the taggers, while the other will be the runners. The game’s objective is for the runners to cross the rectangle playing field back and forth without getting tagged by the other team! This game is also almost the same as the “Squid Game” series’ “Red Light, Green Light”. Players get to move to the finish line as long as the it says “Pepsi” and must not be caught moving once they call “7-Up!” But of course, there is no shooting involved here. On a Chinese garter tied into a circle and worn by two opposite players, each player must jump in a pattern while counting to 100 in increments of ten. In each round, the garter goes higher and higher–which is why “experts” can be very creative!

This one requires chalk so you can draw a playing field on the ground and you and your playmates’ pamato. The objective is easy: to hop throughout the course without stepping on the lines or the box where your pamato is. Winners also get to mark and design their “bahay” and other players cannot touch it in the next round! Similar to Sepak Takraw, all you need to do here is keep the Sipa in the air for as long as possible without using your hands! The Sipa is usually made out of plastic straws and bottle caps. Aww, the nostalgia!

Which one is your favorite? Tell us in the comments!